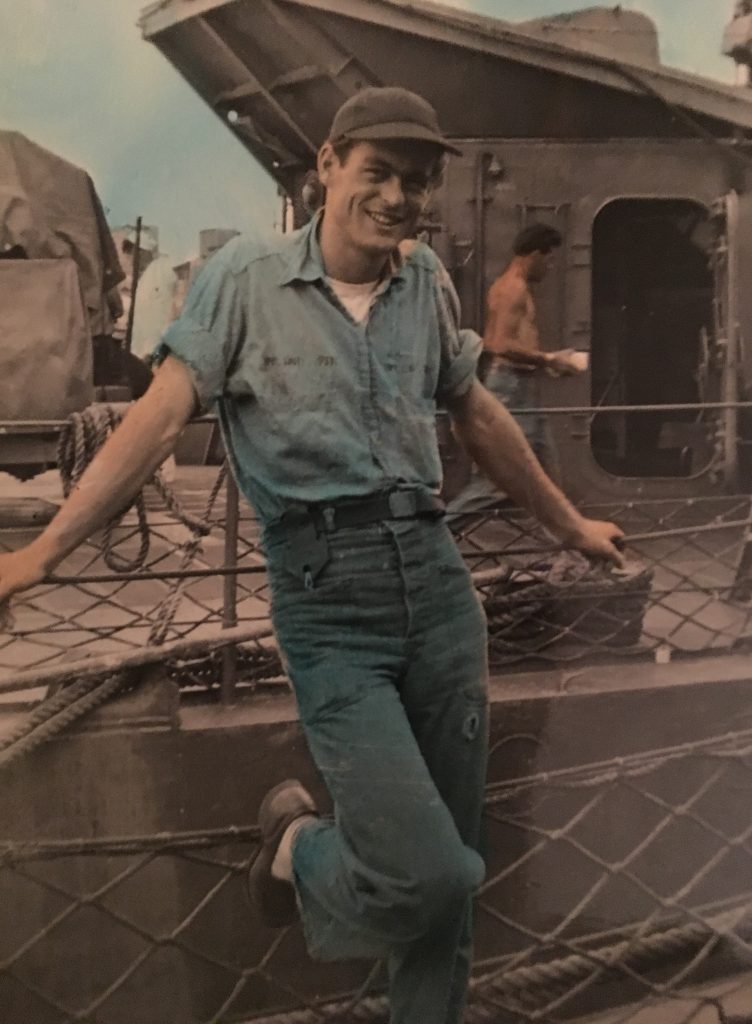 On March 24th, 1944, at 18 years old, David S. Mickelson of Eau Claire, Wisconsin leaves high school to enlist in the United States Navy for a duration of two years. After completing training at the Great Lakes Naval Training Center in Illinois, David is assigned to the USS Hughes.

The USS Hughes was one of nearly 400 destroyers that served for the US in WWII. Destroyer crews were nicknamed “Tin Can Sailors” because the the hull plating of destroyers were so thin that sailors claimed they were made from tin cans. The Hughes had already seen quite a bit of action prior to David coming on board. The most significant being the action she saw at the Battle of Midway escorting the aircraft carrier USS Yorktown during the battle.

David boards the Hughes for the first time on July 22nd in Humboldt Bay, Papua New Guinea. Only one week later, the Hughes participated in the invasion of Sansapor. August 1944 is spent off the coast of New Guinea patrolling for Japanese subs and planes and in September 1944, the USS Hughes leaves the waters of New Guinea and participates in the Battle of Morotai.

In October 1944, during the invasion of Leyte to retake the Philippines, the Hughes became the flagship of Rear Admiral Arthur Dewey Struble commanding a task group assigned to help capture the small islands of Dinigat and Homohon. The Hughes was patrolling the entrance to Leyte Gulf on October 20th when General Douglas MacArthur made his triumphant return to the Philippines.

The USS Hughes, now the flagship of Task Force 78, lead the way in the assault on Ormoc Bay in the Philippines. During the landing of troops in the bay, enemy air activity was heavy and kamikaze strikes frequent. Two nearby ships were hit by kamikaze attacks and both eventually sunk. During the attacks, the USS Hughes opened fire four times, scoring hits on two different Japanese planes, one which ended up crashing over the starboard bow of their ship. 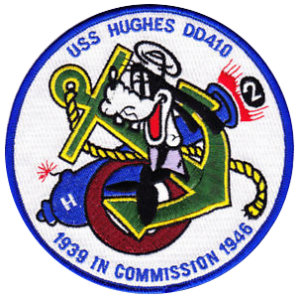 On December 10th, the USS Hughes returned to the eastern side of Leyte Island, this time as part of a patrolling mission. At 4:48pm, only ten minutes into their patrolling assignment, ten enemy aircraft appeared from the clouds and began attacking the Hughes. Seven minutes into the attack, one of the Japanese planes began a kamikaze dive. The gunners on the Hughes were able to score multiple hits on the plane during its dive, causing the plane to burst into flames, but it wasn’t enough. The plane, with a bomb still attached, crashed directly into the midship of the USS Hughes.

The explosion opened a large hole in the port side, just above the water line, and destroyed their main electrical power supply. The USS Hughes was now in flames and dead in the water. The crew went right to work fighting the fire and 30 minutes later the fire was out. The crew erupted into excitement when four American P-38’s appeared out of the sky and chased the enemy planes away for good. The P-38’s provided cover until darkness came and the tug USS Quapaw was able to tow the Hughes back to safety in San Pedro Bay. 18 brave soldiers of the USS Hughes were killed in the attack on December 10th and another 40 were wounded.

The Hughes survived the attack and spent the next six months in repair and preparing to return to war, during which time David was promoted twice. In February of 1945, as part of the repairs, David and the crew were sent to San Francisco. In March, David got one month of leave to return home to Eau Claire.

In June 1945, David and the Hughes returned to the war and sailed to the Kurile Islands where they would participate in multiple patrolling, mine-sweeping, and bombardment operations until the Japanese surrendered on August 15th 1945. The crew went ashore on mainland Japan at Ominato in October 1945 and head back to the US for good on November 16th.  David was honorably discharged from the Navy on April 29th, 1946.

David’s Path During the War

Click on a map icon for each location’s name:

Drag left & right below to discover his timeline during the war:

Photos of David, his ship, and of the places he served in during WWII:

Custom WWII Research and Storytelling - All Rights Reserved © 2020
Contact Us